A systematic approach to Medical Coaching

In regulatory medicine, bioresonance therapy is one of the best-known methods of the complementary medical procedures, whose devices are in use nearly all over the world. It was founded in 1977 by Franz Morell MD, who summarized his findings from the electro-acupuncture according to Voll (EAV), as well as the Chinese medicine to a new therapy approach based on biophysical principles.

In the course of time, the method has undergone numerous modifications in the technical execution of the devices, as well as in the mode of application. There is also a variety of manufacturers on the market providing all new devices with different approaches and explanations for the function of their methods. For interested persons a difficult situation to find the appropriate method for starting in this field of biophysical instrumentation.

Most users of the classic bioresonance therapy were so far used mainly to work with frequencies and frequency bands. Followers of Oriental naturopathy can now perform a bioresonance therapy according to the laws of classical Chinese medicine. Instead of specific frequencies for the regulation process they can now apply acupoints and indication programs for symptoms and diseases patterns according to Chinese type patterns. Patient-specific fractals and so-called Shen formulas (affirmations) come to enhance the applications. The principle of regulation is the same as for all intangible concepts and based on quantum physics and is controlled by the consciousness of the user.

The new procedure is unique in its kind and represents a synthesis between Chinese natural medicine, Eastern philosophy of nature and modern Western information technology. It is authentic, practical and perfect. The trade name is Bucher TAO Medical. It was founded by Dr. phil. Dr. rer. medic. Andrea Mercedes Riegel, sinologist, author and researcher in the field of Chinese medicine and Hermann Grösser, who has over 20 years of experience in the realization of psycho-cybernetic devices.

The fundamental goal of each Tao medical treatment is the harmonization in the flow of Qi, the restoration of balance from Yin and Yang and the adjustment of the transformation phases.
The working principle is beyond matter and similar to classic bioresonance and radionics, as well as other complementary medical procedures. It is intangible and linked to the consciousness of the user. However, the "real mechanism" that acts by implementation of intangible information in the living organism, is so far unknown to exact scientific knowledge.

The method applies primarily to:

The application of the Bucher TAO medical is easy to learn and no special skills are required to work with it successfully. The theoretical basics and additional information are outlined in the books by Dr. Dr. Andrea Mercedes RIEGEL (www.mercedes-riegel.de). Basic knowledge of Chinese medicine is beneficial but not compellingly essential, since many functions are controlled automatically by the software.

There are several areas of application, based on different criteria, but in combination they complete each other in a perfect way: on the one side there is the nonlinear system analysis of the I Ching resonance Diagnostics, which directly provides the treatment recommendations and on the other hand the use of prefabricated regulation programs (over 400) is possible which are prepared for Western diseases analyzed according to Chinese disharmony patterns. In addition the previously mentioned applications of color light can be added simultaneously for the harmonization of the psycho-energetic centers (chakras).

Another special feature is the information on Chinese herbal formulas and Chinese standard formulations which are assigned individually.

The system is composed of the hardware, the so-called mind-matter interface and the specially designed matching software. The software is designed in such a way that testing can be done either according to the quantum resonance principle (without contact) or directly by a psycho-physiological coupling on the mind-matter interface (MMI). Testing by the psycho-physiological coupling is the recommended alternative as the result of direct contact on the mind-matter interface delivers optimum data. It should be used whenever possible, as the client is better integrated into the event of the more sophisticated ritual.

Basically, every initial application should be preceded by a one-on-one interview with the patient because this is the only way to assess the actual situation which then can be entered as "focus". In general the focus is prepared in cooperation with the client and entered in his presence directly for testing.

The result of the test includes all relevant details required for the harmonization of the organism. These include among others the I Ching resonance diagnosis of the hexagrams found with the corresponding points for treatment, a client-specific fractal image affirmation for meditative contemplation as well as the SHEN formula (SHEN = spiritual), which includes the appropriate affirmation for each hexagram found. The affirmation should encourage the patient to reflection and action.

The subsequent regulation is effected via the automatic programming or directly by applying the TAO Colorpuncture (acupuncture without needles) by means of the audiovisual colored light probe.

According to Chinese teachings the hexagrams are symbols for sky and earth constellations. They make statements about the current situation in the macrocosm and the microcosm of man. They are composed of lines symbolizing Yin and Yang (continuous line = Yang, broken line = Yin), their basic units are the trigrams. There are eight trigrams, whose combination by 2 shows the number of 64 hexagrams. The meaning of a trigram, the kind of combination of the two trigrams and the distribution of the yin-yang lines in the hexagram reveal precise information, which is important for the application of the TAO medical system.

The interpretation in the medical context is automatically done by the software program and the system allows users to work successfully right from the beginning. 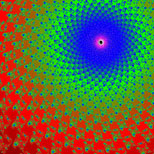 Fractals are graphical designs that are individually calculated by using a mathematical algorithm. They are an intermediary between worlds, between the visible and the invisible reality of man. They include the specific topic of a person and are calculated either by scanning via the "psycho-physiological coupling" or by the "quantum resonance principle". The computed fractal represents a personal "pictorial affirmation" that is running during a treatment.

The pictorial affirmations can be transferred to energy carriers in the context of an information transfer (encoding). They can also be printed and enlarged, so that they are at any time available as a psychological anchor.

The already mentioned prefabricated therapy programs for Western symptoms and diseases analyzed according to Chinese disharmony patterns are another feature of the system. Here a combination of acupuncture points is used for regulation. The basic idea is: "Use programs for regulation instead of needles". Therapists who want to needle anyway and have a legal permission for it, can easily do so, because the points for the regulation by quantum physics are identical to those of body acupuncture. In general, the displayed "MagicPoint" alone may be adequate for treatment.

The programs include the optimum acupuncture points for regulation, as well as recommendations for Chinese herbs as well as Chinese standard herbal recipes. Currently, there are over 400 programs that will be continuously expanded. The programs can be sorted out by electronic filters and displayed according to the appropriate application areas. Depending on the choice only those programs are displayed, which fit the desired category. It is a kind of quick search, which immediately delivers an overview of those treatment programs which may be adequate for the client.

The programs available are for example the programs for allergies, infections, psyche, beauty and cosmetic, emergency treatment, ENT, ophthalmology, dentistry and many others more.

The entered “focus” can also be applied simultaneously in a synergistic combination with the ready-made programs, which in some cases could be beneficial. In addition, the time for regulation is adjustable.

The regulation applies to all indications of Psychosomatic Medicine, TCM, Homeopathy and biological medicine including other methods such as Bioresonance and Radionics. They all can be treated according to the principle of consciousness medicine. 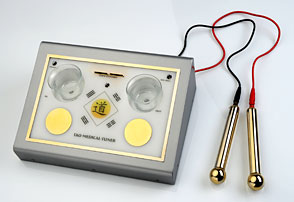 Mind-matter interfaces are tools of consciousness medicine. They are a focus point in the therapeutic ritual and act as a mental bridge between patient and therapist. They are equipped with a psycho-physiological coupling, which at the same time measures the electrodermal activity (EDA) and serves as a controlling device for further data processing.

The standard version consists of the TAO medical tuner that is suitable for all applications in connection with the software. A smaller, low-cost model is the psychosomatic tuner, which is also well suited for mobile use. The top model is the bio-signal tuner, a universal device that has a built-in light source for additional stimulation through the eyes. 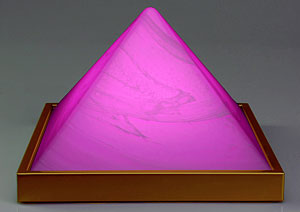 In order to intensify the regulatory process the treatment can be supported by an external color light source. For this application the previously mentioned color light pyramids, as well as color spotlights are available. The latter create a soothing atmosphere and flood the space with a homogeneous color light. It is a patented process, where even the wavelengths can be adjusted precisely. Sounds can be added in the form of singing bowls, but also whole pieces of music could be transformed into dynamic light, which amplifies the resonance on the desired result.

This is a psycho-energetic imprinting process on various information carriers, which serve to stabilize a specific treatment. Globules, semi-precious stones, magnetic cards and sprays are in use. Recommended are sprays (pump bottles, 50 ml), which act as a psycho-dynamic anchor and are applied sublingually. In a similar context also remote treatments can be done on special request of a client.

Combinations with other modules of the Bucher coaching systems

First and foremost, the Bucher Aura Coach is to mention here. It is a program for the review of the current state of the chakras (energy centers) and their subsequent energetic harmonization. The course of treatment is displayed graphically via a statistical function.

This special module belongs to the basic equipment of all Bucher coaching systems. Its design allows the management of all clients and all programs.

Note: Like in all consciousness related procedures, this method also doesn´t give but basic recommendations and never specifies action details in the sense of scientific medicine. It cannot replace the medical differential diagnosis.
All topics
Introduction to Consciousness MedicineScientific arcticlesIntroduction and training videos