The Tao Medical is a modern system for testing and regulation based on Chinese Medicine. It is a synthesis between the eastern art of natural healing and modern western technology of information. Its functional principle corresponds to that of classical bioresonance but instead of using frequences for therapy it uses psychokybernetic programs based on acupoints and audiovisual signals. The basic concept is immaterial and directed by the user´s mind. Diagnosis is made by means of systemic analysis which makes pulse diagnosis dispensable.

The regulation programs of the Tao Medi cal may replace the acupuncture needles. Therapists who do not want to give up needling and have a licence for needling can use needles because the points for psychoregulation are acupoints. In general one master point is enough for regulation the rest being done by the program´s automatic procedure which is activated by the therapeutic ritual.

In practice we have the following strategy the ritual being of great importance:

Pre-regulation is made by means of interrogation of the patient. After that the results are summed up in a few words and recorded in the “focus” of the assistance software. First the mode of testing is determined.

The choice can be made between:

Testing begins by connection to the mind-matter-interface. 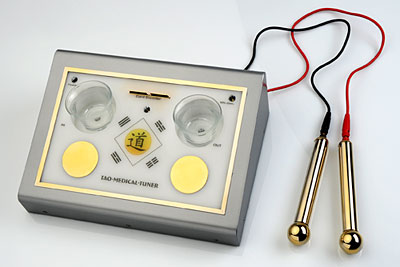 The recommendation for treatment is based on the criteria of the pre-selection and includes Chinese herbal recipes, standard recipes as well as therapy programs for the treatment of disharmony patterns. “Pictorial affirmations” and “shen formulas” are also indicated.

Regulation also is made by the mind-matter-interface. Therapy time may be divided into three steps. The procedure is self-running by psychoenergetic activation of the acupoints. Audiovisual signals like singing bowls and color-light which may be set up in advance may be added. Despite all technical refinement the therapist remains the all-decisive component. It is the attention, the concentration on the matter itself which influences the result and initiates the effect of regulation.

Fractals are graphic illustrations which are based on a mathematical algorithm calculation. They are mediators between the worlds of the visible and invisible reality. They are calculated during the psychophysiological connection and they bear the patient´s personal concerns. The fractal represents an individual “pictorial affirmation” which is presented during treatment for harmonization of all parts of consciousness. 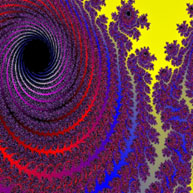 The pictorial affirmations may be encoded on carrier substances (sprays, globules or magnetic cards). They may also be printed out and enlarged so that they may be available as psychological crutch or for meditation. The fractals are an important part of the Tao-Medical. They are an essential element within the scope of the Tao-Medical treatment.

SHEN = mental. She represents the right affirmation of each hexagram. Its purpose in combination with the fractal is to motivate the patient for reflection and action. It is used like a mantra.
The fractal as well as the affirmation may be sent to the client via e-mail.
Below we see an example for a diagnosed hexagram with its corresponding shen-formula:

Hexagram 59 – (The dissolution) with three changing lines.
Shen-formula: Inspired by positive influences I get the upper hand and escape the whirlwind of disease.

Note: Like all the other treatment methods based on consciousness the described method only gives advices and does not make any indication concerning medical effects in the sense of scientific medicine. It may not replace medical consultation.
All topics
Introduction to Consciousness MedicineScientific arcticlesIntroduction and training videos