Initial and follow-up scans - How often should you scan?

There are three questions that our customers often ask:


Subsequently, I will try to answer these questions by means of examples.


The reason why we have developed initial and follow-up scans can be best explained by an example.

Suppose you have an old house that is a little in need of repair. So far, there were maybe only flaws that did not affect the function of the house. But recently the windows are no longer draftproof and the hinges have not been oiled long-since.

The house in the example represents your clients/patients.

The craftsman in the example, who is to set the house in order, stands for the therapist.

Let us assume that we work like our Bucher Bioresonance Triselect. If we go there in the scan area and make a first scan, it is automatically an initial scan.

Therefore, we note (in our initial scan) that the plaster should be renewed on the south side, the windows sealed and all hinges need to be oiled.

So we take a bucket and mix new plaster, which we can then use for the repair. In our example the bucket, the new plaster and the renovation stand for the treatment/therapy of the patient.

Of course we cannot do it all at once, it takes some time to fix our house up gradually.

You can see how our work with the house gradually shows an effect. In the fifth picture we have completed the work that we had decided to do on viewing from the south side. It looks really nice again.

Now that we have achieved our goal, which is to resolve all the problems that were visible from the south side, we can move forward to the next initial scan.

This means, in the case of our house that we now are looking for a different perspective for a new scan. Suppose we scan the house now on the north side. There is still much to do. 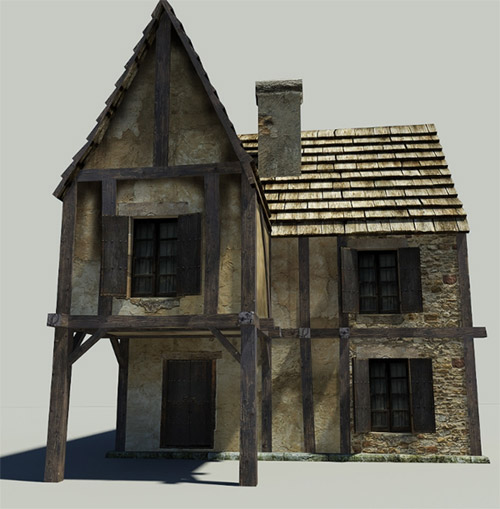 So we note the "defects" there too and start the repair work which we check from the new location using the "scrutiny" again and again.

Once the north side is also renovated, we can give our attention to the next point of view, going on until the house is completely finished. There are still an east and a west side after all.

Let us imagine now what would happen if we performed a lot of initial scans (without follow-up scans) as often do users in the early stages of working with our systems.

First, we start with an initial scan. It shows our house from a certain direction and we recognize the existing damage and problems on the building façade.
We take a bucket and mix a new plaster to repair the damage.

Before we even start with the "plastering", we already perform the next initial scan. We are now looking suddenly from a different direction to our house and realize that here the windows need to be replaced. So we start with the removal of the defective windows.

But since we are very curious, we already start the next initial scan. Now we have a look at the top of our house and discover some broken tiles.
So we go quickly to the DIY store and buy new tiles.

In the meantime, the new plaster has dried up in our bucket and we cannot use it anymore. Being busy with scanning again and again we forgot to use the plaster for renovating our house. Now we have to discard the bucket, look for a new one and mix a new plaster.

No craftsman would work like that. OK, some perhaps, but they surely won`t get further orders from the houseowner. An effectively working craftsman would first finish the work started and then check out what and where to continue working.

By nature, humans are much more complex than the house of our example. That's why for people there are more than just 4 directions, from which you can view and resolve the problems, but a large number of.
We are "educated" (sometimes incorrectly), we are "demanded" (sometimes too much, sometimes too little), we interact with our environment, we are influenced by (often supposed) models, through advertising, by ideology or religion. There are certainly not only negative things that affect us, but the negative we experience has generally an unfavorable effect on our inner balance.

As a result, we are blocked in certain areas of life. If we suffer from these blockages and do not solve them for a long time, we are on a path that can lead to disease. It would thus be metaphorically speaking better to leave that path.

Sometimes there is a problem with a house you do not know the cause of. For example, there is sometimes a small puddle of water in the basement of our house next to the furnace. It cannot be rainwater, because the furnace is in the center of the room and there are no exterior walls.
The installer you called claims that all water pipes are tight. So there must be another reason.

Let's say that someone has a scanning system, which allows you to detect the reason for such problems. Would you expect the following answer from this system?

"The problem is a puddle of water in the basement."

Such a response would not profit us. It merely describes the symptom, which we already know and does not indicate the cause.
How about instead with the following response of the scanning system, which might indicate a cause:

This is an indication that we can investigate. We climb to the roof and find that there is no cover for the chimney. During heavy rains, the water runs into the chimney and therefore comes down to the service door in the basement and runs out next to the furnace.
The cause of the puddle is thus the lack of coverage of the chimney.

As the example shows, it is relatively unimportant that the scan system indicates the symptom. Much more important is the cause, the cause of the symptom.

But something must have caused the high blood pressure and even keep it constantly high. If we got an indication of the cause, we could perhaps remedy it and the body had absolutely no more reason to keep the blood pressure so high.

In the scan of this woman, for example, appears the following entry:

The therapist asks, noting that the relationship of the woman no longer works properly. The woman is desperately trying to steer their marriage in a more harmonious direction and swallows all problems. For fear of confrontation important things are simply not addressed and feelings that want to be expressed are suppressed to the best of one`s ability.
It simmers inside her and the pressure increases from day to day. If not soon find a valve, high pressure will eventually cause a bodily harm.

At least we have now found a cause (in the above example, the lack of coverage of the fireplace) and can try to reduce the pressure by making strategies available to the woman, how to react better in appropriate situations, while perhaps being able to "let off steam". If she can internalize these strategies, the body has no more reason to keep its blood pressure on an "alert level". The blood pressure returns to normal and is properly regulated again.

As a recommendation for the use of our systems, users should be careful to perform no more than 2 scans per week for a client. Ideally, you can even make 1 scan per week only. More scans usually only lead to more work and in a circle rotating self-healing power that does not have the chance to reach a goal right because it is sent again to another destination.
The ritual of sending (the transfer of the corrective information to the client's field), however, can be performed any number of times, either directly with the system or through globules, magnetic cards, water, or other information carriers, which can be applied by the client himself where appropriate.

A therapist should always try first to resolve those blockages and problems which hinder or burden the patient most. Therefore, initial and follow-up scans (up to 1 to 2 times per week) and a reasonable number of transfers are particularly suitable.

Since there are no follow-up scans with Bucher TAO Medical (here every scan is an initial scan), there should be only 1 to 2 scans per month with this product. The scan results can also be sent (applied) several times a week.

With this help, the patient may find a "fork in the path" that leads him to a more harmonious, healthier and happier life.
All topics
Introduction to Consciousness MedicineScientific arcticlesIntroduction and training videos